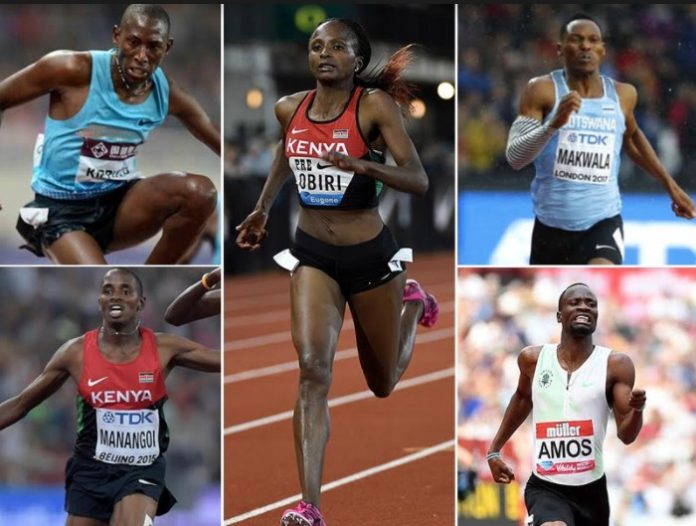 It’s that time of the year when we bring out our metrics and rank the best African athletes in the 2017 Athletics season, analyzing their performances and why they made the cut .

From the World Championships in London to the climax of the Diamond League series in Brussels, African athletes held their own against the very best in the world and deservedly emerged tops in their respective events.

As has been our tradition towards the end of every year, we rank these athletes from 10 down to No.1, so let’s delve straight into Part 1 of our Top 10 African Athletes for this year, counting down from 10-6.

How can one start writing about Isaac Makwala and not feel a tinge of melancholy? Such was the belief we had in this Botswana athlete that we named him as one of 5 African athletes we were sure would win their first World Championships medal!

As the saying goes, “Man proposes but God disposes.” Things didn’t go according to script, and although Africa didn’t gather at a cathedral to sing a dirge, the continent collectively mourned for its own when Makwala left London without a medal.

Before we even evaluate the reasons for sharing in Makwala’s pains, let’s take a good look at what he churned out going into the World Champs.

Makwala was one of only four men to dip under 44s in the 400m this season. In fact he clocked three sub 44s this year, a first in his career, and a feat achieved on different tracks, thus erasing any aspersions people cast on him for only running a sub 44s at, well you know the place, La Chaux-de-Fonds, where he set a then African Record (AR) of 43.74s in 2015.

However, this year, Makwala clocked 43.84s in Monaco and 43.92s in Madrid, being in the best shape he could be heading into the World Champs.

Going by how well he matched defending champion Wayde Van Niekerk at the Monaco Diamond League, missing out on victory by just 0.11s, that ignited a feeling of an exciting duel to look forward to.

Having comfortably navigated through the rounds and winning his semifinal heat in 44.30s, all looked set for the epic showdown with Van Niekerk as many opined that he was in the form of his life to beat the South African.

Then the Norovirus outbreak happened and a nightmare occurred for many. Makwala was quarantined because of the outbreak of gastroenteritis at the London 2017, missing the 400m final.

Despite declaring himself fit to compete and turning up to run in the final, Makwala was turned back in a well publicised global outrage that drew sympathy for the athlete.

By the way, he missed the 200m heats, but was later reinstated to run a solo race in a scant consolation move to compensate him for the incident that happened with the handling of his ailment.

Although Makwala was the World Leader in the 200m with a time of 19.77s, it was very evident that his mind was in the 400m, saying after his solo race that he was “running with a broken heart”.

He eventually finished 6th in the final with a time of 20.44s, but it was not hard noticing that the attention surrounding his illness negatively impeded his psyche.

There was some consolation for Makwala weeks after as he eventually ended the season on a high, claiming the men’s 400m Diamond Race trophy, beating the field to win in Zurich with a time of 43.95s.

To have overcome all that and really make a statement on the world stage with his impressive outings, Makwala earns his place in our ranking this year.

Do you know that Botswana would have held a national holiday in honour of Makwala if he had won the 200m GOLD at the World Championships?

It’s been a mixed three years for Manangoi who eventually cracked the top after persistently pushing himself up to emerge as the best athlete in this discipline.

Contending in a sea of great Kenyan 1500m runners involving the likes of Asbel Kiprop and Silas Kiplagat, it was Manangoi who finally shook off their shadows to chart his own destiny.

Manangoi was a former 400m runner before making the switch to 1500m, and finished 12th at the Commonwealth Games in Glasgow with a time of 3:45.47. However, it was a year later that Manangoi properly announced himself on the world stage when he finished 2nd behind Kiprop to take Silver in Beijing, cutting off about 11s from the year before to post a time of 3:34.63.

Although he couldn’t carry on that momentum into the Rio 2016 Olympics where an injury hindered him from progressing past the heats with an overall placement of 26th and a time of 3:46.83, he came back stronger in 2017 to dominate the world.

Going into London, Manangoi had so much working for him as he had the World Lead (WL) of 3:28.80, a Personal Best (PB), and also at the back of his younger brother George winning the 1500m title at the IAAF World Under-18 Championships in Nairobi. All these spurred him and he took his chances.

Finally, success arrived for Manangoi as he outperformed his Kenyan rivals to win the world title in 3:33.61.

Although he is believed to be trying out the 5000m next season at the Commonwealth Games in Gold Coast, Manangoi would no doubt dominate the 1500m for many years to come.

Do you know that Manangoi has a farm in Kenya which he manages himself and that is where he trains?

From one Kenyan athlete to another, at No.8 in our ranking is Hellen Obiri who finally grasped the world title in the women’s 5000m.

Any athlete who hands Almaz Ayana a resounding defeat surely deserves their place in the sun, and that’s what Obiri is getting, having beaten the revered Ethiopian in London.

For Obiri, it was a case of whether she could do it alone, going by how a team tactics with Vivian Cheruiyot aided them in being able to beat Ayana at the Rio 2016 Olympics.

With Cheruiyot retiring from the tracks and switching to road races, Obiri was left to figure out how to beat Ayana on her own. The Kenyan who ran the two fastest times in the event before London, with a World Lead (WL) of 14:18.37, made sure she capitalized when the opportunity presented itself, and emerged with the crown.

Obiri produced a fine display to cross the line in 14:34.86 and win her first ever world title since her debut six years ago in Daegu where she finished 11th in the 1500m.

Obiri went on to win the 5000m Diamond Race trophy after clinching victory in Brussels with a time of 14:25.88.

Do you know that Obiri was planning on leading the initiative in that 5000m in London until an advice from Cheruiyot changed her approach? “She told me to be patient no matter what and only kick in the last 400m”, Obiri said after her triumph.

7) Nijel Amos
It is bewildering how Nijel Amos didn’t win the 2017 men’s 800m World title in a race David Rudisha did not take part in. When Rudisha withdrew before the commencement of the World Championships in London, the coast looked clear for Amos to have an unimpeded attempt at the title.

Just before the World Championships, we had identified him as one African athlete well placed to win his first World Champs medal, although it didn’t happen as envisaged.

Having come to London as one of the leading contenders for the title, Amos would be disappointed with himself that he didn’t deliver when it mattered most.

In a race not many people would have accurately predicted, the Botswana athlete finished 5th, crossing the line with a time of 1:45.83, as French athlete Pierre-Ambroise Bosse won in 1:44.67.

It might not have come for Amos in London, but this season, he showed that he has cemented his status as a top dog in the men’s 800m.

Such was Amos’ form that he won six of the eight Diamond League races in the 800m this year. It was what earned him a spot in the Diamond Race contest, cementing it with victory on the last day in Brussels with a time of 1:44.53.

This season, the only athlete to have run faster than Amos is Emmanuel Korir who holds the World Leading time of 1:43.10. Amos’ time of 1:43.18 is the second fastest in the world this year.

Might not have had a good outing at the World Champs, but Amos makes it at No.7 on our ranking this year.

Do you know that in preparation for the season, Amos averaged around 2,500m while training at the Kaptagat forest in Kenya?

6) Conseslus Kipruto
When Conseslus Kipruto couldn’t finish the men’s 3000m Steeplechase at the Rabat Diamond League, with Soufiane El Bakkali going on to win that day, it looked like the Moroccan would surely give the Kenyan sleepless nights in London.

Now, back to that race, Kipruto withdrew when the race was beyond him. Many interpreted it as a cautionary move as he was believed to be nursing an ankle injury. Kipruto had started so brightly, but so had El Bakkali who was pumped up for the race, striking the front early.

Kipruto suddenly had a big haul to claw back after landing badly from a water pit, and couldn’t match up as he Did Not Finnish (DNF) and wisely withdrew. It was obvious he was waiting to strike in London.

And strike he did! Kipruto made sure he led the initiative as he’s always wont to do, not giving El Bakkali any room to come in from the inside at the home straight, winning in 8:14.12.

That was the only title missing in Kipruto’s collection, as he added the world title to his Commonwealth and Olympic triumphs in 2014 and 2016 respectively, a feat not many Africans could boast of.

Although he won just one Diamond League race, he made sure that he secured victory on the last day in Brussels in 8:04.73 to be crowned Diamond Race winner.

On his day, he is unmatchable, and the entertainment he brings with each victory is what endears him to many.

Do you know that Kipruto won the World Youth title in 2011, World Junior title in 2012, and World title in 2017, one of only few athletes to be a World champion across all categories.