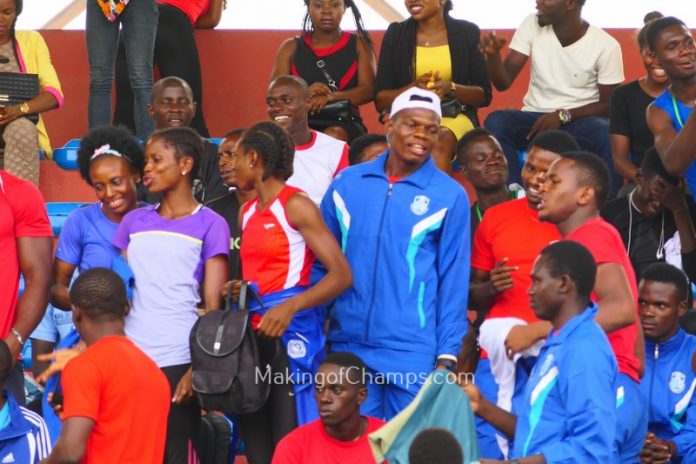 Other higher institutions might be wondering what the University of Port Harcourt (Uniport) is doing rightly, having watched in consternation as they scooped as many as nine GOLDs on Day 1 of Athletics at the ongoing National University Games (NUGA) in Makurdi, Benue state.

Hosted by the Federal University of Agriculture in Makurdi, this 25th NUGA games seemed to be  all about Team Uniport in Athletics, as they clinched victories in both the men and women’s 100m final, the most anticipated races of the competition.

Harry Chukwudike who two weeks ago posted a Season’s Best (SB) of 10.48s at the All Comers in Port Harcourt, raced to victory in Makurdi running a time of 10.57s.

He was hardly troubled in the race, with Enoch Adegoke of Obafemi Awolowo University (OAU) taking Silver in 10.64s, and Uniport’s Uremu Idjesa completing the podium places in 10.78s.

Meanwhile earlier on in the women’s 100m, Aniekeme Alphonsus breezed past her fellow competitors, posting an SB of 11.61s to take victory. Mojoyinoluwa Adekunle finished 2nd in 12.09s, with Tobechukwu Ugbor 3rd in 12.22s. Team MoC’s Ifunanya Muoghalu couldn’t overcome a poor start as she finished 4th in 12.37s.

If Team Uniport were making the 100m look easy, they also stream-rolled the 800m, winning both categories. Uwemdimo Abasiono Akpan stormed past others as they took the bell after one lap, racing to victory in 2:19.82. Her Uniport teammate Chinonso Nwokeoji followed in 2nd with a time of 2:21.29, with Blessing Mpama from the University of Nigeria Nsukka finishing 3rd in 2:28.84.

There were 400m heats with the finals coming up on Day 2 in both categories, as well as in the 400m Hurdles. National athlete and Uniport’s, Praise Idamadudu who posted the fastest time in the heats with 55.21s will be the favourite for the title, but she will be wary of Glory Nathaniel who won her heat in 55.61s, and will also be competing in the 400m Hurdles final.

The Uniport team was so dominant that in all the track finals competed for on the day, the women’s 100m Hurdles which was won by Delta State University’s (DELSU) Okolosi Oghenekome in 16.23s and the men’s 5000m were the only track events they didn’t win.

Akpan who would go on to win the women’s 800m, won Silver in 16.35s and got her second medal of the day, while Moyosore Badejo from the University of Lagos (UNILAG) finished 3rd in 18.48s.

Field Events
Team Uniport also made the field events theirs, securing all the wins in the four events. Judith Aniefuna won the women’s Shot Put with a mark of 12.88m, beating her teammate Veronica Kasie Ugeh who was 2nd with 10.41m and Blessing Bede 3rd with 8.32m.

It was also the same identical top two finishes in the women’s Javelin, where Aniefuna clinched her 2nd win with a mark of 34.60m. Ugeh placed 2nd with 32.90m, while Ternenge Nyough was 3rd with 26.18m.

Women’s Triple Jump was won by Uniport’s Uchechi Brown in 12.18m and her teammate Chinagorum Nwaelehia 2nd with 11.93m, while Esther Olaosebikan from Ekiti State University finished 3rd with 10.30m.

It was a similar story for Uniport in the men’s Discus, with the school’s representative, Ifeanyi Nwoye winning with a mark of 52.70m and Uchenna Onyejiaka from Nnamdi Azikiwe University (UNIZIK) 2nd with 36.18m while Julius Shadrah was 3rd with 34.44m.

In fact the kind of effusive celebration Team Uniport exuded each time any of their teammates was in action, others couldn’t help but become green with envy. Who wouldn’t be, certainly not when it is a one-sided show dominated by a particular school from Rivers state.