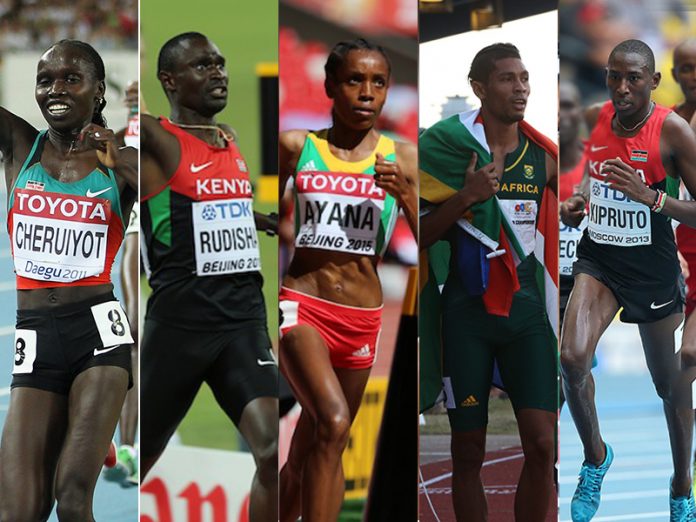 African athletes were at the forefront of the World Record (WR) breaking spree in Track and Field at the Rio 2016 Olympic Games. Others set Olympic Records (OR) to win their event at the Games. Here is Part 2 of our Top 10 African Performers at the Rio Olympics, with our latest countdown featuring Nos.5 to 1.

Rudisha is the World Record (WR) holder in the men’s 800m, having posted a scorching time of 1:40.91 to win the London 2012 Olympics, becoming the first and only athlete to have gone under 1:41 in the event. Due to the swiftness of the race, having been described as ‘the greatest 800m race ever’, all of his competitors ran exceptional times, with Silver winning Nijel Amos having to be stretchered out of the track.

No one was expecting a WR breaking feat at the Rio Games though, seeing that the past two seasons have been quite challenging for the Kenyan middle distance runner who has been hit by injury more times than he would like to count. This led to him finishing 3rd in the National Trials, having been upstaged by Alfred Kipketer and Ferguson Rotich.

Seeing that he barely made the team, a win was all that the 27-year old needed at the Olympic Stadium in Rio. Rudisha maintained an unbeaten run at the Games, lowering his times in subsequent races after winning his heat in 1:45.09, and the semis with a time of 1:43.88. The battle line was drawn ahead of the final and Athletics fans were eager to see how the race would play out.

The reigning World Champion kept cool in the earlier moments of the race, but after Kipketer overtook him and started to accelerate, Rudisha emerged from behind to overtake the Kenyan Champion, establishing a gap with the rest of the field to race to a World Lead (WL) and Season’s Best (SB) of 1:42.15, inspiring defending champion in the 1500m, Taoufik Makhloufi to a Personal Best (PB) and World No.2 time of 1:42.61.

USA’s Clayton Murphy emerged the surprise Bronze medallist in a PB of 1:42.93, and Pierre- Ambroise Bosse 4th with an SB of 1:43.41. Rudisha’s exploit in Rio made him only the first person since Peter Snell (964) to win back-to-back Olympic 800m titles. What a perfect climax to a less than average season for the former World Junior Champion.