Just days after the Diamond League meet was staged in Africa for the first time in Rabat, Morocco, another major Athletics competition took place on the continent with Dakar, Senegal hosting the fourth IAAF World Challenge on Wednesday.

Nigeria’s Patience Okon George came close to winning the women’s 400m after she was overtaken right at the line. George who last week won at the Sapele Golden League in 52.00s, thought she had the win in the bag only for Bostwana’s Lydia Jele to pip her and take victory in 52.18s. The Nigerian champion had to settle for 2nd finishing in 52.20s with Jamaica’s Patricia Hall 3rd in 52.75s.

George who last year ran two PBs of 50.76s and 50.71s respectively, will be hoping to get close to that mark this year, and would wary of the threats of Margaret Bamgbose who has run 51.11s this season, and the returning Folashade Abugan.

In the men’s quarter mile, Rabah Yousif won in 46.08s with Onkabetse Nkobolo 2nd in 46.30s and Nery Brenes 3rd in 46.48s. Nigeria’s Orukpe Eraiyokan seemed to have now recovered from the injury he sustained in Sapele, finishing 5th in the race with a time of 48.07s.

As expected, African athletes dominated the Championships with many winning their respective events as they laid markers for the season.

In the men’s Hammer , Pavel Bareisha won throwing a distance of 75.29m with Serghei Marghiev 2nd with a mark of 75.13m and Yevhen Vynohradov 3rd with 74.53m.

Meanwhile, Hrisóula Anagnostopolou won the women’s Discus with a mark of 58.27m and Natalia Artic-Stratulac 2nd with 57.52m while Fama Top was 3rd throwing 35.07m. 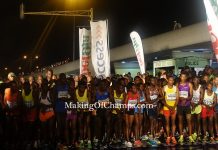