The world has been waiting for two years to see the fastest man on the globe, Usain Bolt and his main rival, Justin Gatlin, go head to head in the same championship. A small part of that wish was met today as both sprinters, who belong to the exclusive class of the Top 5 athletes EVER, had the opportunity of measuring their strengths as the men’s 100m heats took off at the Bird’s Nest Stadium in Beijing on Saturday.

The men’s 100m was undoubtedly the major highlight of the opening day of the 2015 IAAF World Championships, with Gatlin and Bolt being placed in Heats 6 and 7 respectively. Prior to their taking to the track, some impressive performances had already been recorded as Asafa Powell, who is the world No. 2 this year, set the pace with the 91st legal sub-10s run of his career, running 9.95s to win Heat 1.

However there was a bit of drama in Heat 2 as South Africa’s Anaso Jobodwana was disqualified for beating the gun, thereby ending his campaign in the 100m. The disqualification affected the race, as the times were noticeably slower than that of the previous and subsequent heats. Tyson Gay took the victory in 10.11s ahead of Nickel Asmeade (10.19s) and Christophe Lemaitre (10.24s).

Qatar’s Femi Ogunode took Heat 3 with 9.99s but USA’s youngster, Trayvon Bromell was the man to beat in Heat 4, cruising to the fastest time in the 100m heats until then in an amazing 9.91s. The 20-year old is definitely one of the young athletes to watch out for at the Beijing World Championships, along with Canada’s Andre De Grasse who finished 2nd in 9.99s behind Jimmy Vicaut (9.92s) in Heat 5.

And then it was time for Gatlin to race and the anticipation could be felt from all quarters, and not without good reason. The 2005 World Champion has been unbeaten for two consecutive seasons, ending 2014 as the fastest man over the 100m/200m, and extending his scorching form to 2015 where he currently tops the world rankings in both 9.74s and 19.58s respectively.

The determination of the controversial American, who certainly has a point to prove, could be seen as he took off at the sound of the gun, blowing away the rest of the field easily before easing off as he approached the finishing line. The clock stopped at 9.83s, the fastest time recorded by any of the athletes in the heats! His performance no doubt placed some pressure on Bolt who was expected to respond in equal measure.

The World Record holder in the 100m/200m has tried to allay fears that he is not fit enough to retain his title, having spent some off the track after he was hit by injury after the New York Diamond League in June.  His fans from all over the world were relieved to see him return to action at the London Diamond League which he won in 9.87s. His presence in Beijing was proof enough that he was indeed ready to defend all three titles (100m/200m/4x100m).

The crowd waited eagerly for their hero and he did not disappoint, striding smoothly and controlling the tempo of the race to return a time of 9.96s, despite not having the best of starts. He was challenged by USA’s Michael Rodgers who followed hard on his heels, but Bolt took it easy to clock only his third sub-10s of the season. However it remains to be seen how much the Jamaican can lower his time ahead of the semis and final on Sunday, and if he can indeed retain his 100m crown come Sunday.

After all, Bolt is known to be a championships performer, and has the reputation of rising to the challenge at major events. A good example was the London 2012 Olympic Games where he retained all three titles despite having been beaten by training partner and team mate, Yohan Blake in the Jamaican Trials earlier. The gap between the times of the pair will however get Bolt’s fans a little worried, as the American made it evident that he still had a lot more to give.

Even pundits will be reluctant to give a  verdict as the race is expected to go either way. It will also not be totally out of place to expect an athlete like Bromell to spring a surprise, considering that the youngster follows Gatlin in 2nd place in the final rankings of the qualifiers ahead of tomorrow’s semis. Eight men will file out for the final on Sunday, but to the rest of the world, it will be a two-horse race between Bolt and Gatlin, and it may not be business as usual! 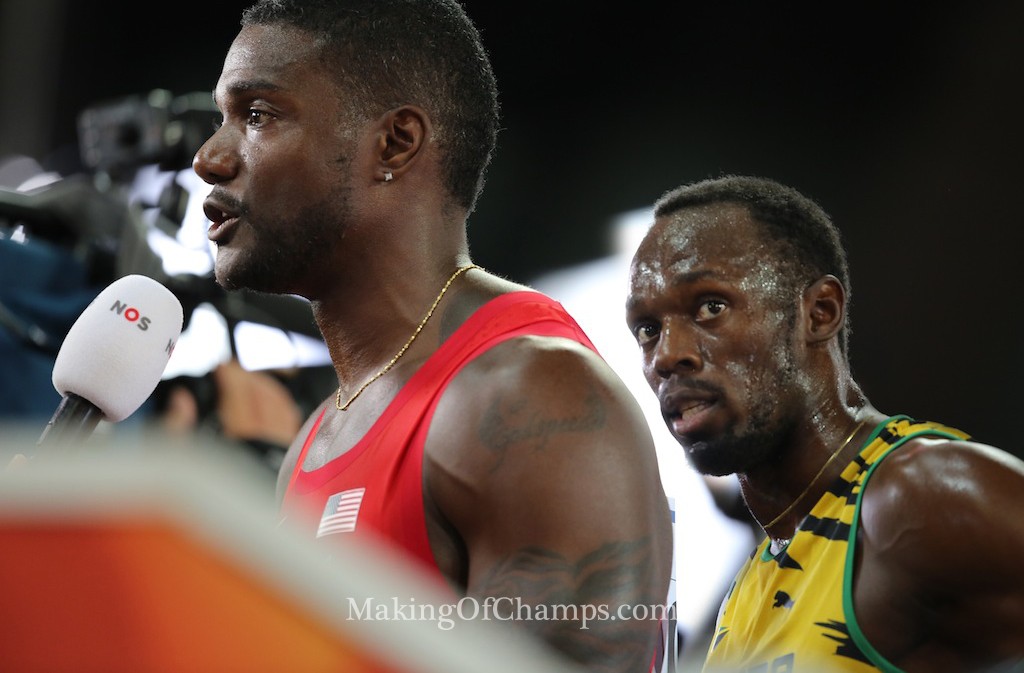