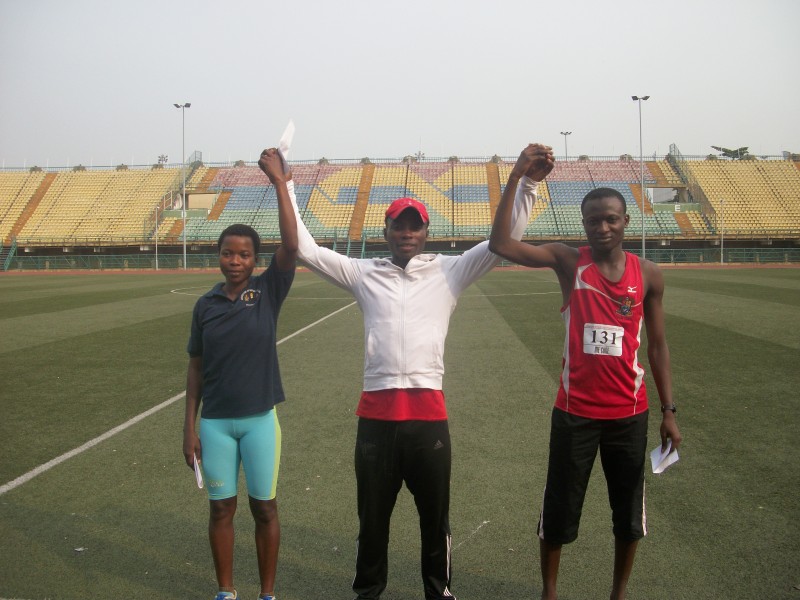 It was an afternoon of excitement and competition as over 200 athletes representing various track clubs from the country challenged each other to their best in preparation for the upcoming season on Friday, 12thDecember at the Teslim Balogun Stadium in Surulere, Lagos.

The competition, which is the first edition of the Coaches Challenge by the Track And Field Coaches Association of Nigeria (TAFCAN), Lagos Chapter, is aimed at preparing athletes for the coming season and also assess how well the coaches have fared during the buildup phase for the 2015 athletics season.

The start of the event was delayed as the stadium had to be thoroughly cleaned up, following the APC Primary Elections which concluded at Teslim Balogun the previous day, but this didn’t affect the the athletes’ zeal to represent their various clubs well and put up their best performance in preparation for the upcoming season.

The event started with the men and women’s 3km race walk which was won by Kazeem Adeyemi, who is the National Record (NR) holder in 20km race event, while Semide Fadekemi all the way from Ogun State, won the women’s category.

Secondary school students also tested their guns against each other in the 4x100m relay. Stars International College from Ikorodu won the the girls’ category while Igbobi College did it for their school in the boys’ category.

Worthy of note and huge significance is the fact that anchor leg for Stars International College, Joy Udo-Gabriel, was a silver medalist at the 2014 National School Sports Festival (NSSF) and also helped Team Lagos to a GOLD medal at the same championship.

Going into the over distance events such as the 300m, 600m and medley relay, Loveth Odia representing Eagle Sight Club was the star performer of the day as she carted home victories in both the 300m and 600m in times of 38.10s and 1:33.91s respectively.

Odia, who has performed in several national competitions and meetings, has a Personal Best (PB) of 53.60s in the 400m and was part of the 4x400m women’s relay team that won the GOLD medal for Cross River state at the 2012 National Sports Festival (NSF).

Speaking exclusively to Making of Champions at the end of the competition, President of the Lagos Chapter of TAFCAN, two- time Olympian EnefiokUdo- Obong, said that aside the limitation of not having enough funds as promised by sponsors, the unavailability of the stadium workers to help with necessary things such as electronic timers also caused some hitches.

However he was impressed by the encouraging turnout of the athletes as well as the times posted by some of them in various races. On the association’s vision for coming years, he expressed hopes that the competition would become the official season opener, which will be incorporated into Athletics Federation of Nigeria (AFN) annual calendar .

He also stated that with the support of more sponsors, there would be another event by the end of January. “The vision is to make sure that all the athletes and coaches mark it down on their calendar as one of the most important competitions in their preparatory period for the season, and the government plus coaches would take it more seriously so they can learn from it” he said.

With the success of the competition and performance level of the athletes, one can only hope for discovery of more talents in future editions. TAFCAN must also be commended for staging such an event which could become eventually become a key phase in the athletes’ buildup for the next season.