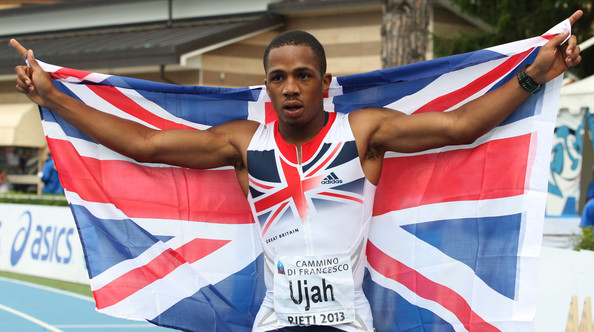 20-year old Chijindu Ujah in his first season running as a senior, sprinted to prominence last night in Holland, clocking 9.96s in the 100 metres, making him only the FIFTH British Athlete to go under 10 seconds, and moving him straight up to third in the British all-time list, behind only Linford Christie (9.87s) and James Dasaolu (9.91s). He finished second in the race to Trinidad & Tobago’s Richard Thompson, the Silver medallist  from the Beijing 2008 Olympics, who won the race in 9.95s:

This is another massive personal best from the virtually unknown British youngster, whom we reported had brought his PB down from 10.26s to 10.14s at the Manchester Great CityGames only last month. Now he has truly announced his arrival on the big stage, and he has British commentators salivating on the resurgence of British sprinting. Ujah is yet another athlete born to parents of Nigerian descent but who was born and bred in Britain, after James Dasaolu shot to 2nd in the British all-time list last year, with an incredible 9.91s run at the British Championships! Ujah is coached by Jonas Tawia-Dodoo, and his training partners include Long Jump Olympic Champion Greg Rutherford, and a couple of other youngsters of Nigerian and Ghanaian descent, Deji Tobias and Sean Safo-Antwi!

Here’s the obvious question for Nigerians – WHY is there a trend for Nigerian-born or Nigerian-origin athletes to excel at Sprinting everywhere but Nigeria? Indeed, we just reported this weekend that Nigerians are no longer the fastest people in Africa, even though we hold 7 of the top 9 positions in Africa’s all-time list. Interestingly, the Africa is not the only continent where Nigerians BORN and RAISED in NIGERIA are the Record Holders:

1. Francis Obikwelu, 9.86s (POR) – he ran for Nigeria until Sydney 2000 and switched to Portugal in 2001, setting this European Record by winning the Olympic Silver medal at Athens 2004!

“There are currently over 72 million young people in the country. Thus, youth, more than oil, could be Nigeria’s asset in the following decades” – askGEJ.com

Indeed, Nigeria has over 100 million people younger than 25, and this represents an ample talent pool to dominate a sport that is very empirical, a sport where your success does not directly depend on the performance of others. Nigeria has always had a glorious opportunity to dominate Athletics in a way that only the USA ever has, but apparently everyone else in the Athletics world seems to know this, apart from Nigerians! Leading Sports Geneticist, Dr Yannis Pitsiladis has spoken profusely about the possibilities of Nigeria’s Athletics, as has Bahamian Athletics Executive, Harrison Petty, in the run-up to the 1st ever World Relay Championships in May!

It is also widely known that Nigeria was the nation that America feared the most in the nineties – Carl Lewis was very vocal that the USA should stop funding other countries’ Olympic teams (read: Nigeria) through handing them US Collegiate Scholarships en-masse. In fact, it had been predicted that Nigeria would be the next Track & Field superpower to emerge, but that turned out to be the little Island of Jamaica, population: 3 million (all descended from West Africa, by the way). Jamaica’s rise over the last 15 years has been down to a deliberate private sector effort in Jamaica, by Jamaicans, to produce the world’s best sprinters.

So how come not a single person or company in a country of 170 million people realises that there is the opportunity of a lifetime to train Athletes IN Nigeria, and get them firing on all cylinders against the best in the world? Athletics is the one sport, more than any other in the world, where the greatest battle is the one against oneself – if Nigerians as a people can come together and win the battle against the cultural and economic challenges that hinder real progress in producing World-Class athletes in Nigeria, then global domination in Track & Field beckons!